Posted at 14:29h in IRF news by Tanushree Rao 0 Comments

In early 2016, IRF offered members of the Emerging Water Professionals Program the opportunity to be considered for seed funding for a project aimed at benefiting a river or river-dependent community. Emerging Professionals from around the world collaborated on some incredible proposals for an action-oriented program to solve water related challenges. One of the successful proposals was developed by Dymphina Andima, focused on addressing challenges in the Mara river basin, Kenya, in partnership with the Mara river Water Users Association (MRWUA)  and Rhodes University. Here, Dymphina shares her experiences in developing community resilience through linking local action to basin planning…

Let me take you to the very first day of my journey. During my first trip to the Mara, the first stop was at the office of MRWUA where the water resource committee members were waiting for me to start the meeting, which had been pre-arranged by the manager, Mr. Kennedy Onyango. We greeted each other informally before the start of the meeting and familiarised ourselves with those who presented. “Welcome to Amala Madam, we were informed of your arrival and we have been waiting for you. We understand that you are from KALRO-Kisii. I have been to Kisiii before and I have relatives there”, said a lady participant. After the introduction by Mr. Onyango, it was my turn to introduce myself and explain the purpose of my visit.

The meeting went until 4pm due to the translation process from English or Kiswahili to the local language. I asked where our focus should be in addressing the challenges of the Mara river basin and the chairperson Mr. Chepsit replied, “Amala River has most of the challenges as it is located in the lower basin and mostly degraded compared to the upper and mid-catchment areas”. The rest of the participants agreed that Amala should be the point of intervention, as it is being impacted by the disproportionate abstraction of water for agriculture taking place in the upper Mara basin. Water users are also experiencing conflicts with those living in the upper basin, and with those from within the Amala catchment itself. We then discussed the workplan and activities to be undertaken during the coming weeks, including mobilising other water users for training on conflict resolution and conserving the river, establishing model farms and upgrading the weather station among others.

More meetings took place over the following weeks and I got the chance to interact with the community and conduct three sets of training on conflict resolution and best farm management practices. A total of 80 water resource users (39 females and 41 males) attended the training sessions, revealing the the extent to which access to clean water is a challenge,  especially for women. Kennedy shared with the group the importance of farm planning and soil/water conservation and techniques for better farm management to reduce soil erosion and get good yields. ‘’I do not believe in baselines since so many have been done in the area by many organisations. Instead I believe in proper farm layouts and also best farm management practices that will go a long way in conserving our rivers’’, he said. He then demonstrated what a good farm layout looked like using a typical scenario. I presented the causes of water use and access conflicts and conflict resolution using typical examples faced by water resource users in daily activities. As I watched the training unfold, the message was clear from the discussions and role play shown by the female participants during the training that women suffered most when it comes to accessing water and constant water shortages. Even for the few who were lucky to have accessed to water points such as springs, there were conflicts over who get to fetch water first. This made the participants laugh and they all agreed that this was what was happening in the villages where water points existed. I enjoyed the role play and had fun with them since they depicted what they faced in day to day routine as women. This is further exacerbated by other existing challenges such bathing, washing clothes, car washing, diverting water sources for commercial irrigation and dumping of waste along the river among others. However, arguments arose as to why there was a dam being constructed which would deprive the locals of their sources of water. The committee discussed the measures that they took in solving the problem by writing a petition letter to the concerned parties and the county Government. This gave me a chance to revisit the solutions to water conflicts discussed earlier that included seeking a common ground with all affected parties.

After the training, we visited local farms where we met farmers living along the Amala River, including Jessica Changdoi, Mr. Chepsit and Paulo Sitienei. During these visits, we identified areas that we could use as model farms, and suggested techniques to better manage farms situated near the river, including farm planning, soil conservation measures, and interventions such as contouring, grass strips, digging small trenches and growing cover crops. During our visit to Mr. Chepsit’s farm, his wife Anne welcomed us and showed us part of the farm that was selected as a demonstration plot. We took a walk to the river and came across a lady washing clothes. Sensing our arrival, she disappeared into the bush. Anne told us that it was common for women to wash clothes there since there wasn’t any other source of water available. We took the challenge of advising them on the importance of conservation, and I later on learned that the locals were aware of the dangers of polluting the river but did not have a choice to act differently. Most of the residents relied on the river for water use and by the end of the visit, we came across a young girl, who was about 12 years old, came to fetch water from the river which was about 1km from her house. According to a UN report (2016), women were active players in achieving the Millennium Development Goals and yet collectively, women from Sub-Saharan Africa spend about 40 billion hours a year collecting water. The scenes I witnessed while being at the farms remind me of my English literature class in high school from the novel “No longer at Ease”, by Chinua Achebe, when Mr. Jones suddenly became poetic and intones ‘’Water, Water, everywhere but not a drop to drink’’, (1963). His words reflect well with the Amala River. Even when the river is flowing with a large quantity during the rainy season, it comes with all the silt and no one benefits including livestock and other animals. It is more than quantity and quality matters.

One of the functions of MRWUA is to give recommendations on water permit applications from government authorities as a voice of the community. During our project, we  refurbished and calibrated the existing rain gauging stations to enable more effective monitoring of river flows, which indicate the critical levels where water should not be abstracted for commercial uses such as agriculture. Richard Chepkwony was also trained to use low cost equipment to monitor river PH and conductivity levels to determine the pollutants in the water.

In essence, our initiative focused on achieveing long-term impact by intervening at the sources of the problem, rather than addressing the effects. I am grateful for the support provided by the International RiverFoundation through the leadership of the CEO, Ian Atkinson in addressing river Amala challenges, which has been a great journey. My sincere thanks also to Vanh Mixap and Patricia Dalby for their tireless efforts in making sure that we are well and up-to-date with our work and encouraging words of wisdom. My thanks also to Kennedy Onyango and the MRWUA, Nelson Odume and all the emerging water professionals with whom we have shared our work through the IRF. It has been fun working together as emerging water professionals on an initiative that is new and exciting considering that there is an over-concentration on water specialists who are few. The seed funding provided has provided the beginning of opportunities for new generations of emerging water professionals in getting involved in creating positive change. 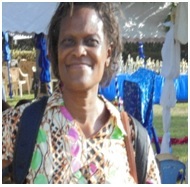